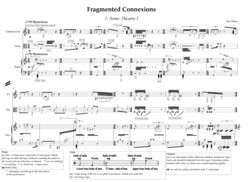 
The following is taken from the notes in the score.

The piece can be performed in one of three ways. First it is  possible to perform the seven movements as documented above. Alternatively, the movement order can be re-arrangedso long as the two Sonic Theatres frame position is retained. The third method requires a creative approach by the players. Each movement contains one or more ø signs. Each ø denotes the end or beginning of a fragment. For example, movement 3 (Scherzo) consists of four fragments (bb1-6, 7-23, 24-41, 42-55). This third way allows the players to break the piece into its individual fragments and recompose the structure to form new movements. It might be decided that a fragment from another movement  is inserted at a given ø or that the fragments are completely reassembled. The two Sonic Theatre movements do not contain any ø marks. That said, they could be broken up in any manner the players see fit and could potentially be used as bridging material as well as framing movements. When mixing or reassembling fragments, players can reuse individual fragments as many times as desired or exclude them completely, so long as the whole piece lasts between 7 & 15 minutes. When joining some fragments, players will have to be judicious in their approach to linking them; minor changes can be made to the parts at the join points to accommodate such segueing. Players should also be careful to consider physical limitations to the re-assembling process such as page turning  and the use of special effects that require time to prepare (such as in Soundscape). A possible way of dealing with the former issue is to photocopy the score and cut and paste it in the desired manner.

Theatrical Production
In live performance a number of theatrical devices can be employed to enhance the audience’s experience.  In the following notes some suggestions for lighting and other elements are given. In the case of a true ‘fragmented’ performance (version three above), the theatrical design should be adapted to fit the fragmented structure in a suitable manner.


Sonic Theatre I
This movement charts the journey from unknown timbres to the known. The three instruments work in a percussive way, interacting with each other and providing rhythmic textures. Some of the sounds might be almost inaudible in a performing space and so close miking might be employed. That said, the ‘theatre’ is derived from the mismatch between the visual physical activities of the players and the resultant sound. As the piece progresses, pitches are introduced but still lack the clarity of the traditional timbres of the instruments. In a theatrical performance the players might be  placed behind a screen/curtain and back-lit so their silhouettes are cast for  the audience to see. With amplification and exaggerated movements by the performers the theatrical aspect will be accentuated. The rest of the stage should remain in darkness with the screen/curtain gradually removed in the closing eight bars.


Shudder
This movement explores both facets of the work’s concept: that of uniting the instruments in one common timbre, and seeking to  make the instruments sound like one another. To the first end, tremolandi are employed throughout the movement. In addition, the natural percussive attack and slow decay of the piano is also explored by all three instruments. During theatrical performance different coloured lighting washes can be used throughout the shuddering sections (tremolo) with one gradually morphing into another. In bb31-45 the stage should gradually turn a fiery red succeeded by a dramatic shift to another colour (or white) in bar 47.


Scherzo
Scherzo is the most highly structured of the seven movements with all the material derived from the clarinet melody (bb2-9) which in turn is derived from the whole work’s pitch rows. The movement unites the three instruments with the common goal of humour and explores the timbres that  each instrument has to offer this end. Vulgar colours should be used with frequent, almost‘cartoon-like’, abrupt changes throughout.


Soundscape
Soundscape employs clarinet multiphonics at its core. The viola and piano unite in supporting this notoriously fragile clarinet  effect by doubling the multiphonic notes out of phase. Various effects are  employed in the piano and viola parts to replicate the multiphonic timbres and  to provide additional discursive material. If possible, the pianist should  obtain an EBow which makes the strings resonate magnetically without striking them. If this is not possible, other suggestions are made on the score. The pianist should also mark the relevant harmonics on the strings using small  pieces of tape. A nocturnal atmosphere should be created with the lighting in this movement with a sudden flash occurring at the beginning of last ff section.


Chorale
Chorale explores how the timbres of the three instruments are distorted by extreme range. The piano is central to this movement with the clarinet and viola replicating its sound. The techniques of cycling pitch rows and out-of-phase counterpoint found in former movements are brought together in the construction of the material. The lighting during performance should be such to convey the atmosphere of twilight. Moving gobo effects simulating water might also be employed.


Sonic Theatre II
Framing the work is an extended version of Sonic Theatre. The sound world has thus moved full circle. In a theatrical performance the players should be front-lit for this final movement with large shadows being cast on the back of the stage. In the closing section (Machine winding down) the stage and auditorium lights should gradually be dropped to  complete blackout.


Acknowledgements
Many thanks to Alison Marsh, Duncan Prescott, Helen Selden, & Rebecca Steel for helping me research the clarinet part.