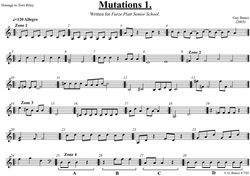 'Mutations I' was commissioned by Furze Platt Senior School to be  performed during the opening of an A-Level seminar on genetic modification. The piece is a minimalist composition based on Riley's In C and is ideal for teaching Minimalism or for playing by amateurs.


Mutations I is designed to be played by 6-10 performers on either keyboards or tuned percussion. If the former are used, a suitable  percussive tone should be employed. The structure of the piece involves each  performer working through the repeated cells (1-25) in order, at their own rate - moving from one to the next when the feeling takes them. The ensemble should aim to be within 5-6 cells of each other at any one time. Cells can be played in any octave (except in Zone 4 where they should be played at pitch -or as close as possible). Also, individuals can move from one cell to the next at any point  in the bar. This can be achieved with familiarity of the different cells and by  listening to the resultant sound of the ensemble.


One possible way of performing Mutations I involves the conductor playing a repeated high 'A' throughout in a similar manner to Riley's In C.  Alternatively, the piece can be performed without the repeating  'A'.