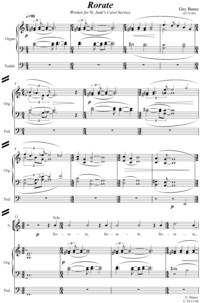 'Rorate' was written for St. Jude's Church Englefield Green for their Carol Service on the 17th December 2006.  The  words are taken from the opening of Isaiah 45:8. The text is used frequently both at Mass and in the Divine Office during Advent, as it gives exquisite poetical expression to the longings of Patriarchs and Prophets, and symbolically of the hurch, for the coming of the Messiah. Throughout Advent it occurs daily as the versicle and response at Vespers. For  this purpose the verse is divided into the versicle, "Rorate coeli  desuper et nubes pluant justum" (Drop down dew, ye heavens, from above, and let the clouds rain the just), and the response: "Aperiatur  terra et germinet salvatorem" (Let the earth be opened and send forth a Saviour"). My setting divides the text in the same way.  This division is emphasised by the versicle being sung by a soloist.