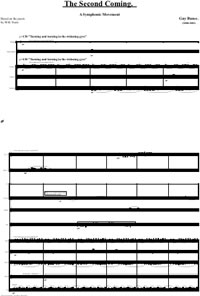 ‘The Second Coming’ is the second work  inspired by the W.B. Yeats’ poem of the same name.  Unlike ‘The Ceremony of Innocence’, ‘The Second Coming’ directly describes the poem in a manner akin with a tone  poem.  However, the music goes significantly  further than the poem in many ways as certain ideas are brought out for  exploration while ignoring others and also add personal  thoughts and views  inspired by the poem.  The work uses  similar forces to ‘Ceremony’ with the significant addition of extra  percussion.  The size of orchestra  (especially with the multi-divided strings) may appear adventurous and even  over the top, but the main objective when composing the music was to illustrate  the size and scale of the poem’s message.   The music depicts stages of darkness and light with many passages  containing extremely dense and chaotic writing.   In such passages, the instruments are employed for their combine sound  rather than their individual sound, (an idea developed from the scores of Stravinsky).


Much of the  composition is texture based with ostinati forming the foundation for the  appearance of themes that represent  different aspect of the poem, and help  guide the listener through.  As with  ‘Ceremony,’ John Adams was an inspiration behind the textural style, especially   in the penultimate section with the slow changes of tonal centre.