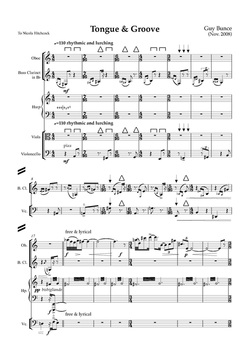 
Written for BMIC and Okeanos


Tongue and Groove refers to the method employed in carpentry in which similar objects are fitted together edge to edge to form a single flat surface. Each piece has a slot or groove cut along one edge and a thin protruding ridge or tongue along the opposite allowing for pieces to be fit together. For this piece I was interested in exploring this joining method musically. The word groove could easily be interpreted in the musical sense. The term is very rarely employed in connexion with contemporary art music but more commonly expressed in the popular styles of jazz, funk, rock, soul, and fusion. The term tongue would require a more subtle approach and thus I returned to the joining method itself noting that the tongue had  two characteristics: first it protruded from the object in such as way as to make it a defining feature of the original object; second, its purpose was to fit inside the groove of another object. I felt that these two characteristics could be interpreted musically allowing for the piece’s concept to be formalised. As the concept evolved it became apparent that the form of the piece would be dictated by the concept itself: a groove would be established using the ensemble, a tongue or protruding melody would be gradually introduced that while different from the groove could be fit against it or inside it. The melody would gradually take over the groove creating a new groove in preparation for a new  ‘tongue.’It could therefore be possible for the roles of each instrumentalist to be reversed either taking a tongue or groove in the same way that is inherent in jazz with the rhythm section and frontline instrumentalists.

The final form of Tongue & Groove differed slightly from this concept; as is often the case in my composing method, once a concept or rule has been established more serendipitous processes often take over leading to the concept itself being broken or sidestepped.  In addition to exploring the above, I have also recently developed an interest in borrowing materials from other sources. To this end I decided to turn to Bach and Das Wohltemperirte Clavier Book II. Bach was the obvious choice for me as I had recently studied Tansy Davies’s Inside Out pieces which also used Bach as a starting point. Also, I felt that the driving rhythms and frequent syncopation that can be found in Bach’s keyboard music would be ideally suited
for the creation of riffs and grooves.